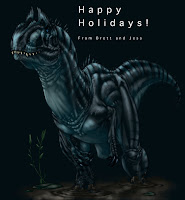 
I love funny songs, this one is by Heywood Banks.

I'll be doing covers for this project (I guess I'm one of several artist doing these) I always like drawing the Darkness:)

For the Geek in us all, go here.

You have to guess the scifi movie/TV show from the sound. I got them all right UBERGEEKDOM here I come! Spacial thanks to Pharyngula for the link:)
Posted by Brett at 12/22/2007 04:22:00 PM 1 comment: Links to this post

Yeah, well that ain't going to happen. Every now and then I will post something on evolution or paleontology, much to the chagrin of others. I do not believe in evolution, I know that it is a fact, just as the sun comes up every morning, the earth revolves around that sun it can be tested and proven. You believe in something because you believe it to be true but do not know for sure.

Science is the quest for truth, these truths are supported by facts. Testable, provable facts. The Big Bang is a 'theory' like Evolution, they are both supported by facts, we do not as yet know what started the Big Bang but some have ideas, some of these ideas are pretty far out there but science is only a few hundred years old. We may one day know most of our universe. But hopefully not all, where's the fun in that?

Now for the question, should religion be taught in science class? It can't be tested, we can not prove any of it's claims. ID/Creation science teaches the book of genesis it true that is religion and this would be forcing religion on others. So, no, the bible should stay at Sunday school it has no place in the science class. I do think we should teach a comparative religions class at schools. With speakers from all sorts of different religions so everyone gets a well rounded idea of all the different beliefs of others.

One last thing. I keep getting told that "I'm a Christian/Catholic and I don't believe these ID/Creationist people, that's not MY version of Christianity." Well good! I hope these vocal few are the minority, but they are the public face of your religion. Why not get others like yourself together and get the word out that not all Christians/Catholics are the same! State your views so us non Christians and Catholics stop lumping you together! The Christian right needs to see a united front against there war on science.

This is my version of Spinosaurus, Until we get better fossils I'm not sold on the sail, Especially since this guy was found with other animals all jumbled together. So sometimes he'll be sailin' other times not;) So this is how I believe him to look;) 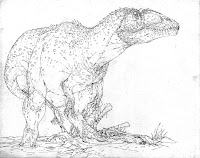 Garrr!!!!! I had this initial-post all done and everything. Then I closed the fricken tab and lost it all. Damn you Firefox! Well, here I go again.

The Vatican has condemned the Golden Compass as hopeless and without God (I'm paraphrasing here.) Get off your high and pointy hat, it's a FANTASY MOVIE, it's not real. And in fact,they do have a religion similar to christianity in the movie/book, and they do have a God in that religion. I don't really know why they are pissing about this. I think it's because the author is a known Atheist (gasp! Burn him!) Here's another revelation to some of you, so am I. I'm proud of. I was raised catholic but I saw the 'light'. Which brings me to what really pissed me off. This whole 'You can't have hope without religion'. WTF? When did this happen. I'm quite happy without some 'god' looking over my shoulder judging me. I don't feel the need for something larger than myself. I'm not hopeless, I have lots of hope, I just don't have this need for an afterlife. I hope to live past 70 with no real health problems, I hope the dogs are healthy, I hope Jess won't kill me in my sleep;) I hope Frankenstein does insanely well. See, I have hope I just don't believe what your selling, that's what's got your panties in a bunch. I don't have a problem with your religion as long as you don't foist your beliefs on me, but I'm not going to stand in the shadows while you insult me. I have influence over a whole 4 people here! Hahahaha! The Power!

On a side note, I want to say this. The Theory of Evolution is a fact. Those of you who don't accept this seem to keep dwelling on the word THEORY. Well, in science, a theory is something bigger than a fact, It has been proven correct over and over again. It consists of multiple concepts, it's the pinnacle of thought in science. What your getting confused on is that a theory to the rest of the world is actually something more like an idea or a base concept. in Science this is called a hypothesis. You make a hypothesis. You then test that hypothesis and if proven true, it becomes a fact. See it's a system that has proven itself time and again like evolution. Intelligent Design is just religion in disguise. They look at something and say that it's complicated and assume it's too complicated to evolve, someone or something must have designed it (ie; the Christian God.) Meanwhile others have looked at the same thing and said it evolved from this other similar form which came from another similar form and so on. We can test this through genes, and guess what, it works! We have tons of evidence for evolution, lots more than the average person will ever see, because these IDists/Creationists get on school boards and force the book makers to remove these facts from text books. Nice, lets keep everyone ignorant of the facts so we can promote our religion. Lets burn and ban the books that disagree with our beliefs so we can take control and now we'll bitch and whine when someone says something different. Help, help we're being repressed! You fuckers are in control now!!!!! And you've done a great job with the country;)

On another side note. What makes these Christian theologians so right? They stole the whole first book of the Bible from the Jews. Maybe we should ask them what it really means.

Sorry about the rant, I was OK until I read Yahoo news. Here's a dinosaur for your viewing pleasure ( a new species of Carcharodontosaurus named Carcharodontosaurus iguidensis,) they ate coconuts in the garden of eden with Adam and his ho's;)
Posted by Brett at 12/19/2007 09:23:00 AM 10 comments: Links to this post

In Abuja we found them living on the periphery of the city in a shantytown - a group of men, a little girl, three hyenas, four monkeys and a few rock pythons. It turned out that they were a group of itinerant minstrels, performers who used the animals to entertain crowds and sell traditional medicines. The animal handlers were all related to each other and were practising a tradition passed down from generation to generation. I spent eight days travelling with them.

The Reason for the Season 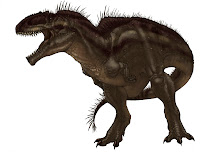 I was in a coloring mood, so I decided to color this guy.

So this is the new book. Go here for more info and some more art: