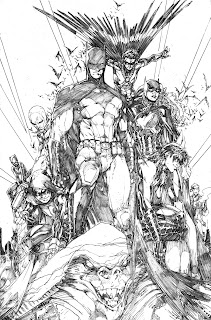 Every year I try to do one, sometimes 2 (one for comics fans, one for dino fans.) So today at 8pm mountain time I will post it. SInce some people have inquired about buying it. It will be $800. The darn thing took me 9 hours to draw, it has 9 characters on it,  and Jess asked if it was a cover so you know I went all out!

So if you're interested in buying it same rules apply as they do on Sketch Saturday, first come first served. But the one piece per month rule will be lifted as this isn't a SS piece everyone can try. If you just want to see it, I'll post it here and on Twitter:) I hadn't planned on selling it until I started getting requests....

If no one buys it I might make a print of ir for a show next year:) 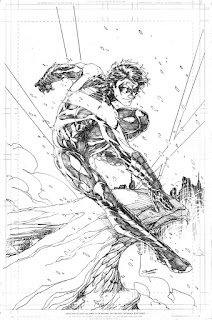 Image 3 in my theme month of winter in Gotham. This week Nightwing. I wonder who Santa will have me draw next week;) 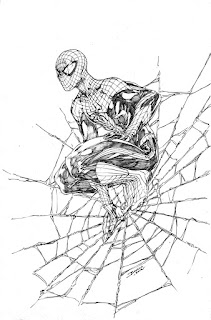 And then a quick Amazing Spiderman, from the new movie. The costume's a bit strange but it's kind of fun! I'm getting a spidey following on twitter so expect more of him.

In other news, working on the cover to my new project this weekend. It should be announced (FINALLY) the beginning of the new year, so I'm thrilled the Mayans' weren't right;P. Also got to do some cool character designs for DC this week! One is a favorite character of mine, and that's ALWAYS fun, cooler still he got approved! I'll also be doing some more covers for some other books, well at least one other for April, also with a character I did the redesign for!

All and all a good year. Now if I can get Dan to give me Wally end of next year or in 2014, everything will be perfect!

This Sunday, do you suck at your religion?

A very funny comic about the suckieness of religion.

I'm gonna do something I know I shouldn't, but I feel it needs to be addressed. What happened this week in Newton was horrible, words can't describe how horrible this is, just like what happend last week and again in Aurora. And I thinking talking about this is a good thing, get your anger out. My Twitter feed exploded and I had to stay off for most of the day. People are angry and lashing out. Lots of "Don't say his name, he wants the press!" and "Fuck you gun owners and your rights!" And of course the gun owners "It's my god given right to own a gun!"But it's good to vent and Twitter is a great place for it.

Unfortunately they also decided to take 'action'! Now action is good, we need people to get off their asses and make a difference. But this isn't really action, it's reaction, it's all feeling and outrage and no thought or introspection.

I own a gun/rifle. I've fired it like 3 times. It's not a big gun, but it does hold 9 shots. Why do I have it? Protection. WELL, you say, people are more likely to be shot than to be able to use that gun for protection! Fair enough. But I live 40 minutes from the nearest police station. Sure they can drive faser than I do on regular roads, but they will most likely crash as the roads aren't that great, they're all dirt... All 20 miles of them. So if something does happen, like say people come to rob us, or drug runners from Mexico show up, at least I have something, the police will always be too late. (A couple of grifters killed a guy out this way a few years ago, nobody knew for days.) I've actually thought of getting a shotgun and a handgun just to be sure a weapon can be gotten too easily, just in case.

So I'm being 'asked' by these people to simply give up my gun, my right. Would this have saved those kids in Newton? Maybe, maybe not. But am I willing to give up the safety of my family for it. No. But Brett, those were children! Yes and it's very, very sad all deaths are. But giving rights way is a slippery slope. Look at the Homeland Security laws that gave the government so much power over us, and our personal lives.

So what should be done? The Left will demand action so why not take this opportunity to really look at what we can do to mitigate further shootings, WITHOUT taking away peoples rights. What has happened here, really happened, facts, not crazy assumptions. Limiting shots to guns? Limiting ammo? Limit ful auto? I'm not sure, but whatever is decided, lets not doing it hysterically, lets do it with knowledge and thought. Not everyone lives in cities with easy access to police and help. Some people still live in rural areas where help might be hours away, should these people give up their only means of protection?

So to sum up, not everyone lives under the same conditions, calm down and think don't just react.

EDIT: Laurell K. Hamilton retweeted this on Twitter and I think EVERYONE needs to read this.

Email ThisBlogThis!Share to TwitterShare to FacebookShare to Pinterest
Labels: Crap from Brett, News, Stuff that bugs the shit out of me, Sunday Blasphemy 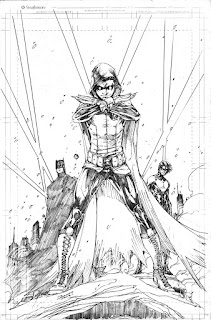 Robin from yesterdays' Sketch Saturday. Just one last week, lots to do and little time!

Forgot to upload these frist 2 to the blog! Crazy week! Both the Catwoman and Spidey are sold. 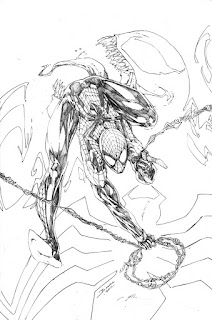 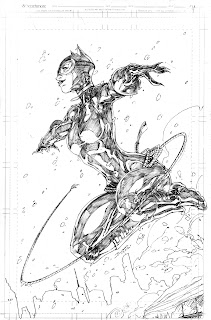 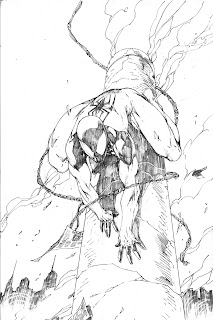 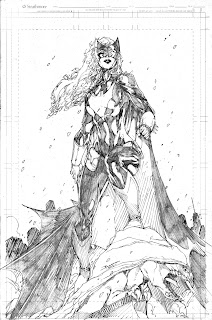