That'll Do, Not Pig 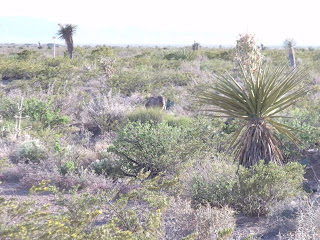 We've had a couple of Peccary sightings in the last few weeks. I got a picture of one today but this guy and his friend were moving through the brush and most of the pics were rubbish. The local version are collared Peccaries, and live in small groups. I have a suspicion they are bedding down in the gully that runs across the front of our property, every time we've spotted them they're coming out of there. They have learned to totally ignore the barking dogs. Peccaries are not in the same family as domestic pigs, which are Old World animals. Locally they are called Javelina. We've been here since 2003 and these are first ones we've seen near the house. They're kind of cute, in a bristly sort of way.

Brett looked at the picture and told me to put an arm on it and call it a crouching Bigfoot.

I always thought Peccaries were high mountian creature? Not sure where I got that idea from though.

Aren't they somewhat related to the Elephants?

I wonder if they are good eating!

Some people put Hippos in Suina.

Peccaries are very adaptable. Evidently there are even urban Peccaries, like in Tuscon and Phoenix, Arizona.

If our pair is still here next year it will be interesting to see if they have babies.

Ahh I know what they are now, I was getting mixed up with Hyrax

Those peccaries are nasty buggers by all acconts if the dogs bump them! Have you ever come across them while out with your lot?

It would take smart dogs to safely deal with those suckers without coming to harm.

It would be interesting were they to stuck around and breed.

I haven't seen any when out, I think most of the wildlife hears me stomping around and vacates the area. Peccaries can be nasty and have very sharp tusks. I don't think it's legal to hunt them with dogs but I wouldn't try it anyways.

We have seen some very large wild boar in the last couple of months, one of them I thought was a large calf but it was the wrong shape. We have a new neighbor (he's some miles away but still counts as a neighbor) who said he saw a buffalo!