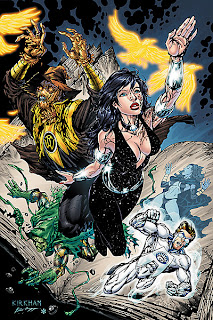 OK, I talked to the Editors. I can 'announce' it. I just finished off an 8 page story for DC, I drew the Scarecrow story for Untold Tales of Blackest Night. I can safely say no superheros... yet. I'm supposed to be doing something else for Superman/ Batman but it's not either of those guys. I'm just waiting on the script for that should be here later today or tomorrow:) So yes, I will be venturing back into superheros, I needed a break from all the approval stuff that goes on with the licensed books. I'll still be doing Anita Blake covers and some other stuff since right now I'm just doing temp work. I don't know if it'll be a total emersion thing or not.
All the sketches? Well, I'm a bit rusty at the superhero stuff so it's a bit of practice:)
Best,
Brett
Posted by Brett at 9/07/2010 09:20:00 AM

Do you know what issue the Scarecrow story will appear in? #1 (which you show the cover for) comes out in October, that seems like a pretty freak'n fast turn around for a story you drew two weeks ago.

It's a one shot, so that's it! Andrew will be done this week with colors so we're actually early.

So, he said he didn't want to do superheroes anymore, but now he's leaning back in that direction. He also said he doesn't like doing commissions.....hmmmm....

"Just when I thought that I was out they pull me back in."

Damon- Dogs have to eat.

Fixed my onscreen name. Google had started calling me "cougar18" instead of MOR. Managed to fix that error, caused by my own mistake. So I'm blaming Google for my own messing up.

You spelled "immersion" wrong. Dunno if you spotted that or not.:)

Anyway, I like to hear you are doing superhero stuff. I know you don't like them, but you may find something to enjoy about the stories you draw.

Technically, a scare-crow story isn't a super-hero story, it's a demented doctor story with a power ring based on scaring the pi$$ out of you :) (Brett-defense to the rescue!)

Dude, I'm soooo stoked you've done this. can't wait to see how it is. RAD! (had to add it to complete the nostalgia)

Look forward to seeing what's next.

I've been a big fan for a long time. I'm glad you are dipping your toes back into the superhero world. I hope you stick around for a while. Hopefully, you'll get the recognition you deserve.

You know, just in case it ever gets to that point, commissions can feed quite a few dogs. Just sayin':-)

And uh, just out of curiosity, what happens to these superhero sketches? Are they Ebay bound?