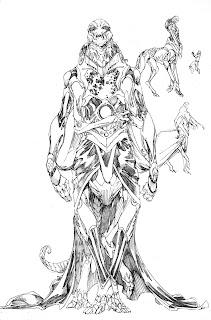 Ah character designs and free time, just don't mix. I was asked to do a design for a new GL character called Relic. An alien from the universe before this one. He was a bit TOO alien for DC so this wasn't used. I still like it.. 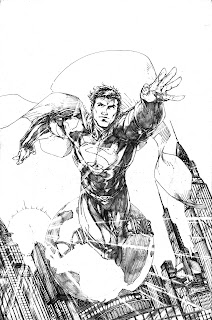 And here are the pencils for that Superman Unchained Alt cover I did! We had to blueline is so there is a penciled version and inked version. Norm has the inked one, I have the pencils:)

I will be posting sketches for character designs for this month as I got another crazy feat of penciling to pull off. Things should resume normally next month, you'll see why soon;)

I can see why Relic would get rejected, from a drawing stand point. You can draw that character in your sleep, I imagine, but to many other pencillers, once they would look at the character design, the most common reaction would be 'I am not drawing THAT!'
The design, in silhouette, is not incredibly complicated, as one can imagine. And I particularly like the placement of Kirby crackle. But I imagine it would be much like the situation that Alan Davis ran into with George Perez' design of Scarlet Witch.
Some artists could draw Relic to look awesome (yes, you Brett, obviously, and folks like Alan Davis or Neal Adams) but other artists might make an attempt to draw him and end up with something that looks just plain wrong, or hideous. And that is before even getting into talking about those artists who would cut corners with the design.
I think the DC editorial are kind of thinking of all artists in this case. I may not agree with them, but I understand their decision.

Im rather tired Download all ur ar from blog and other websites. U drew much

a terrific fantasy critter, though :-)