Some of our regular readers know, five years ago we lived in our van for about nine months. Through the winter. It wasn't fun. But we did learn some things that may be useful to help those of you living in cars, poorly insulated buildings, or tents, to keep warm this winter. This goes beyond all that 'seal things up', blah blah blah stuff you get from the electric company, which is fairly useless anyways if you don't live in a house.

(An aside to those stupid bitches that disparage the poor people who have to give up their pets because their home has gone into foreclosure, you know, the ones who insist they would 'live in their car with all their pets' before they would give them up. You, shut the fuck up. I've done it, it's NOT easy, and we had a piece of property to park our van on. You probably wouldn't last a week.)

Sorry about that, but it needed to be said. On to keeping warm.

First, heat rises. I'm sure you know this. But many people do not take advantage of it. To do so, all you need to do it lower the ceiling. Fasten a sheet or blanket a couple of feet down on the wall, to create a false ceiling. It will keep the heat down where the people are.

Second, cover the windows. If you need light and don't really care about seeing out, you can use double-sided tape to fasten bubble wrap to your windows. This will insulate the window. You can also buy heavy drapes, or make them. Draperies work best when they fit tightly to the side of the windows so cold air doesn't infiltrate the house. Windows in a car can be covered from the outside with a car cover or blankets, or a cover can be duct taped to the inside. Those shiny things meant to keep the sun out also work pretty well.

Third, if your walls are poorly insulated, cover them. Hang blankets or sleeping bags on the walls. You can also suspend them from the ceiling a few inches away from the wall to create an air-space between the blanket and the wall that is insulating.

The fourth one is for your pets. If you are keeping the heat down to save money this winter, please get down on the floor where your pets are and see how cold it is down there. Provide an elevated bed or thick bedding for your pets. Inexpensive sleeping bags work well to reflect the pet's body warmth back to it, and little dogs will enjoy going down inside the bag. A 'dog sweater' for a medium or large sized dog is cheap to make from a child or small adult sweatshirt; just cut off the sleeves and split it up the back, place it on the pet, and tie the two sides of the split together to snug it to the dog's body. We used sweatshirts for our Greyhounds each winter, to help keep them warm. The cut off sleeves make good sweaters for small pets, just cut two leg holes and use the cuff for the neck. Pets who have trouble keeping warm will lose weight in the winter; a little extra fat in the diet will help, if your pet tolerates it. A good dog house is a must for outdoor dogs, indoor dogs might appreciate a covered bed or pen to sleep in.

Fifth, if you actually are living in a car, tent or box, try to get a propane heater. We recommend the Mr. Buddy heaters. They have an automatic shutoff if the oxygen gets low so are safe to use indoors, and can be attached to a barbeque sized propane tank with a hose. There is another brand called Dynaglo which we do not recommend, they do not usually last the winter. If you use a heater that does NOT have an automatic shutoff, crack a window near the heater or your friends might be reading about your death from carbon monoxide. You can get a CO2 detector that runs on batteries from Walmart for about twenty-bucks; a good investment.

Sixth, cover your head. It might seem stupid to wear a hat or hood in the house, but it's useful for sleeping when it's cold, you won't lose as much of your body heat.

Seventh, hang a sheet or blanket over the opening to your outside door. It will keep warm air near the ceiling from escaping when you open the door and keep the room a lot warmer.

If anyone else has any tips, please feel free to add them in the comments.

Some pictures of a strange squid, looks like something out of The Abyss. This was sent to me by Art, he's getting the FF piece, Deadpool and a few others.

Also a new transitional turtle fossil was found, it only has the bottom part of the shell. Read the article if you're interested. And they say there are no transitional fossils;)

Happy Turkey day everyone, it's grey here, no sun, ugh.

A new study shows that religious beliefs are actually BAD for society. Heres a little teaser in case you don't want to read the article:

“In general, higher rates of belief in and worship of a creator correlate with higher rates of homicide, juvenile and early adult mortality, STD infection rates, teen pregnancy and abortion in the prosperous democracies.

“The United States is almost always the most dysfunctional of the developing democracies, sometimes spectacularly so.”

Cool, but this is the best part;):

"The non-religious, proevolution democracies contradict the dictum that a society cannot enjoy good conditions unless most citizens ardently believe in a moral creator.

“The widely held fear that a Godless citizenry must experience societal disaster is therefore refuted.”

So I guess we don't need morals from on high to succeed.

Anyways here's a shot I did of Duecalion for Dean Koontz's website. I'm told it's going to be animated:)

The first 5 issue will be available in hardback on February 3rd. 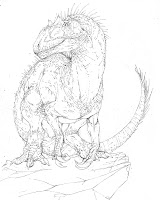 A new Theropod I mentioned a few months ago. I finally got around to scanning it. It appears to be a late surviving Allosaur from South America. It's important for 2 reasons, Allosaurs seem to have died out around 150 mya while this guy was found in sediments only 84 million years old, and they to have mostly hollow bones. Most dinosaurs did, but not to the extremes this one has.

It was about 30 feet long and the restoration (which has only a few parts of the skull so this is pretty speculative) was based on earlier Allosaurs.

Email ThisBlogThis!Share to TwitterShare to FacebookShare to Pinterest
Labels: geekdom

Do you think the stories in the Old Testament are fairy tales? The producers of Nova do. It's a interesting article about a Nova special that premiers this week (it's on at 7 on Tuesday here, but PBS channels are funny so it might be different for your local area.) I'll be watching, sounds interesting. I won't say anything more until I actual watch the show.

I can't say what it is yet, but here are a few sketches, I've changed the file names just to make sure I don't spill the beans to soon.

More and some more commissions soon. It's time to smack some Christians! Well....only if they get to upity, so you in California have a job to do and you can add Mormons to the list as well! I still can't believe the intolerance last Tuesday. Thanks for forcing your religion and bigotry on others.... splitters.

So for you're viewing pleasure it's time to take a stand!

On another note, why don't you vote for Brian Switek over at Laelaps. Help him get a nice scholarship to finish out his schooling!

Email ThisBlogThis!Share to TwitterShare to FacebookShare to Pinterest
Labels: Crap from Brett, Idiots, Religion, Stuff that bugs the shit out of me, Stupid fun crap

I happened across this today: The Annotated Anita Blake: Vampire Victim.

I read a few of the posts. These guys REALLY don't like me. It's good for laugh and I needed one:)

I am bringing this up from Steve's comment on my Thriller overkill post because it is really quite fascinating.