Some more sketches for the Phoenix Con! 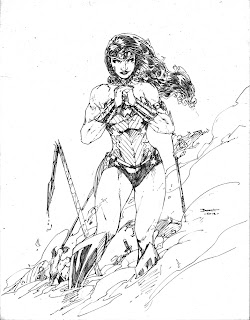 WonderWoman! Jess wanted me to do one:) 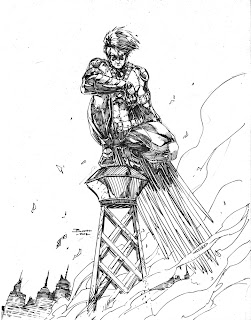 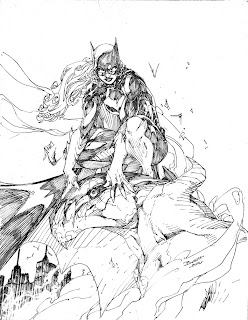 And the always popular Batgirl!

Con was a blast, they treat you like a KING.. or a QUEEN, depending... but a great show to go to!

This... rather late... Sunday, Dinojesus and some idiot... 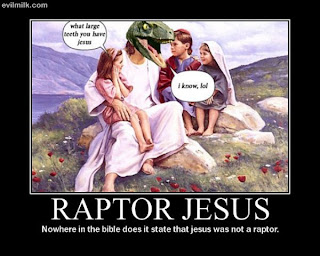 Thanks for this Art!

It's almost painful to watch as her mind tries to cope with simple facts... Do you see now why religion keeps people ignorant? Religion is under attack, and it's not another group, it's logic and reason. 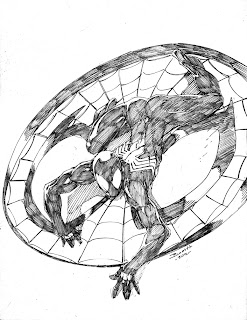 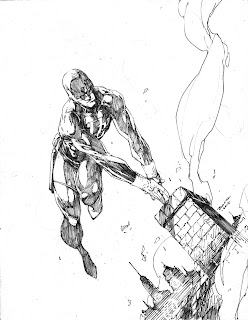 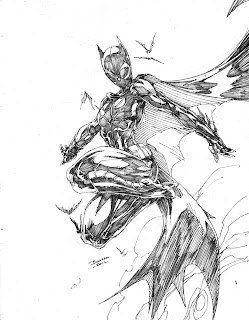 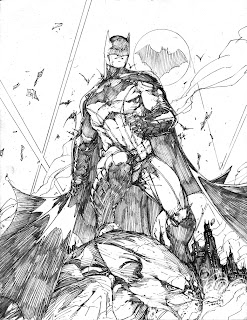 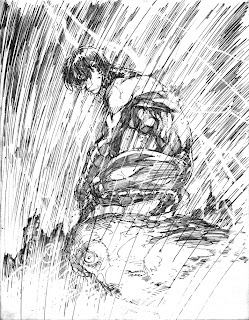 So I'll be attending the Phoenix Comic Con this Saturday, and since I don't do sketches at shows I thought I'd simply bring some along. This way I get to sign comics and talk tot he fans and the fans get some sketches. Win, Win. I'll be working on the sketches this week so I should have 5 or so for the show.

So if you're in the area, stop by and say hi! I'll sign as many comics as you want me to sign;) But remember Saturday only. I should be there around 10 am:)

This Sunday a few quotes and something about Theistic Evolution..

A few quotes from a old school Atheist.

And then a blog post about the difference between Theistic Evolution (Catholic Church style) and ID... Disco Institute style.

All I got this week, I had an idea for another post, but I completely forgot the topic! Gah!

This Sketch Satuday, Nightwing and then some TT art! 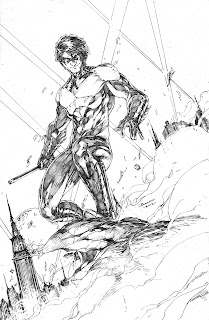 Yes Nightwing again, I was going to do Cass Cain but I didn't have any comic with her in them, so I just picked the first comic I had and it was Nightwing. I did unintentionally smash a bug on this, I worked it into the gargoyle thing... But sill... 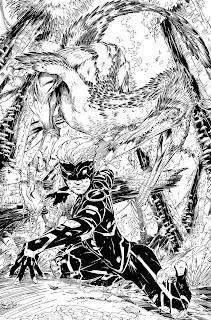 And DC put up this page from Teen Titans 10! Inks by Norm Rapmund!

Please note, I'll be in Phoenix next Saturday to attend the Phoenix Comic Con so there will not be a sketch.

This Sunday, Why does God hate the Americas?

Something that always bothers me is the fact that these religions start with one man, or one sect in ONE place, and then they spread. If there was a god like being trying to, for lack of a better word, teach us, why through so limited means? Wouldn't sending lots of Jesus's or Moses's be far more effective? And it makes you think, what about all those other people in China and the Americas? Save a few, but fuck the rest of the world as I sit on my omniscient throne? Who really cares about them, as these select few or 'chosen' (who have shown to be complete idiots over and over again) are the ones I'll focus on. If we're all Gods children then why is there even a chosen people? He has favorites? Now that sounds a bit petty for a God. Why did he never reveal himself to anyone but a few and have them spread his 'word'? He would have to have known that his messengers wouldn't be able to get to certain places, why not send more? Why and why did it take so long? I mean if this is the word of God, why it is taking over 900-2,000 years to spread across the globe? It's not like humans aren't everywhere now. Why, upon reading it or hearing it, if it's so true is the reader not magically overcome with the magical god love?

But Brett you say, God works in mysterious way, we can't know the mind of God, blah, blah. blah... The Christian God appears to have favorites, he breaks his own rules and takes away a persons 'free will' (Pharaoh's) and then punishes an entire people for it. So he's a liar, and a mass murderer. He seems to like to watch people get tortured, making the Hebrews wander in a desert for 40 years, when it takes a matter of days to walk across it. Letting his 'chosen people get eaten by lions, and then knocking up a young woman and forcing her son to do YOUR bidding, which includes getting tortured and then killed. All to redeem the actions of a few people (who never existed) for eating a fruit you told them not to. A fruit, with some magic knowledge, and you punish them, and all their descendents. Of course they hadn't really been bad before so they really had no idea what would happen to them, but you punished them anyways. Huh, this god sounds a lot like the Greek God Zeus. Petty and temperamental, a bully in the classic sense with a whole lot of ego stroking needed. So can we really not know his mind? He sounds very human to me. In fact, completely human, kind of like a dictator and a bit like Hitler with his 'chosen' people. See what I did there, I tossed that Hitler crap back in your face! Served! And the Allah? Well it's funny how he ALWAYS has the same ideas as Mohammed, if Mo want something then suddenly Allah's OK with it. In a way it's even more outlandish to me than Christianity.

So if these 'gods' are simply peoples wants and desires then we sure as hell can know their minds. And they appear to be incredibly shortsighted, mean, violent and stupid. That sure sound like something I'd worship! Sign me up!

Oh, and think about this religious people. I know this will be hard as you never bother to even consider your religion's faults, or other point of view, but what if YOU were the minority religion and say the Muslims or the evil Gnusaders were the majority? What if they decided that only the Muslim faith OR no faith at all were the only legal 'religions'? You'd be pissed right, and thankfully our constitution protects the minority from the will of the majority so EVERYONE is equal. Then why are you doing the same fucking thing with your no gay marriage 'laws'? It has NO EFFECT on YOU so get off your fucking soup box and back the fuck off. It's disgraceful and disgusting, it's also illegal, unconstitutional and un-American.  And if you bring up any stupid animal shit I will find a way to slap you. WHatever 2 or 2 or 13 adults want to do in their own home is fine as long as everyone agrees to it. It's NOT your business. so leave it the hell alone.
OK, I feel a bit better not 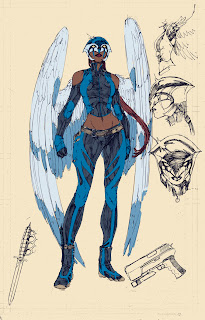 One of the cool things about the New 52 at DC is all the new designs. I was asked a few months ago to try my hand as the new Hawkgirl for Earth2. After talking with the writer and editors I got an idea. and managed to actually put it on paper! Great fun, and I got it approved on the first try! WhoooHooooo! 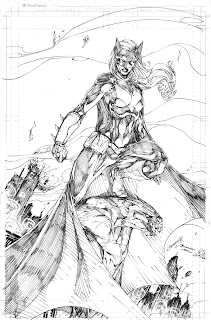 In honor of the Prez. coming out for gay marriage, and to piss off North Carolina, Batwoman!
Heehee! 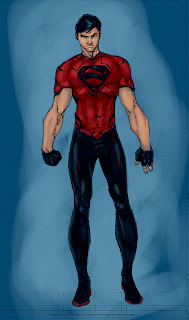 I'm very, VERY tired of the 'Tron' outfits on TT lately so I tried to get them to approve a new non Tron design. No go:( So I'll post it here on the blog and on twitter;)

This Sunday, are you REALLY being honest?

So I saw this map here and it's apparently not real accurate BUT it does raise a point, have you chosen your religion based on it's 'truth' or on the simply fact that that's what you were raised with? Can you honesty say you wouldn't be a Muslim or a Buddhist if you were born in Iran or China? Are you a Hindu simply because you live in or your family comes from India? Are you a Christian because you were born into it or because after searching through ALL the worlds religions it's really the only 'real' one? Have you actually really looked into your religion and others?

So logically if your religion reflects where you live then are any of them really true or are you simply told it true as a child and that's hammered into you until you believe it? Simply because that's the religion of the area?

Nightwing huh, must be Sketch Saturday! 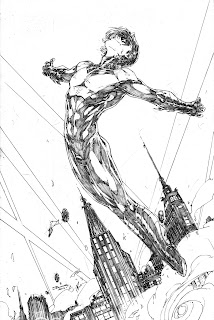 After this week I'm adding a new rule. You can only gt one sketch a month UNLESS no one emails me in the first 24 hours. This way everyone gets a crack at a sketch instead of only a few:)