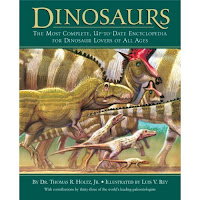 Remember this is just MY opinion, feel free to disagree with me:)

Now I'm going to do something I don't normally do, shoot myself in the foot (hmmm on second thought I think I do this a lot!), but I grow tired of hearing how great this book is. The book I'm talking about is called: Dinosaurs: The Most Complete, Up-to-Date Encyclopedia for Dinosaur Lovers of All Ages. Written by Thomas R. Jr Dr Holtz and illustrated by Luis V. Rey. Now I have other books with Rey's art he's the guy who draws the extreme foreshortened dinosaurs, while it's interesting and dynamic sometimes the color choices bother me, but that's not important.

Why didn't I like this book? Well it was boring... very boring. I'm sorry Dr. Holtz, but I found the book dull. It had a few facts that I thought were interesting but it just didn't work for me. I think it's the 'just the facts' mantra of the new paleontologists, no speculation just facts...it sort of takes the fun out of Dinosaurs, it's like going to school to learn and you are told to read the chapter and answer the questions. You read the chapter with the dull, dulcet sounds of Ben Stein in your head, you answer the questions and then your brain dumps the info. I NEVER learned anything this way. You don't get any vivid images in your head reading this, you don't flash on what life might have been like in the mesozoic. It just a steril white lab. And while the text was boring the art was... well, please take away Mr. Rey's computer and photoshop, he should not be allowed to use them until he gets some proper training.

As I said before I have other books by Luis Rey, I'm not a big fan of his painted stuff, but I do quite like his pencil work, there's a flow and force to it. In the book A Field Guide to Dinosaurs: The Essential Handbook for Travelers in the Mesozoic by Henry Gee and Luis V. Rey, Rey's pencil stuff is my favorite, and there is a lot of it. In the Holtz book.... he tries his hand at doing the dinosaurs all on the computer, they look lumpy and squishy, they don't integrate into the background photographs he keeps placing them into, the colors are muddy and unattractive. It looks like someone trying to do a bad impression of his usual energetic art. The computer is a wonderful tool....if you know how to use it.

But the biggest thing that irks me about this book isn't the book itself, it's the other paleontologists and bloggers who keep saying how great it is. I've read some great dinosaur books, Gregory S. Paul's Predatory Dinosaurs of the World, Robert Bakker's Dinosaur Heresies. THOSE were some great books, both written and illustrated by the authors. Dinosaurs: The Most Complete, Up-to-Date Encyclopedia for Dinosaur Lovers of All Ages is not one of them. I don't understand why everyone keeps falling over this book. I can only guess that Hotlz is now considered one of the 'big boys' and no one wants to tell him the truth? He seems like a nice guy (but the 'wait for the paper' mantra of his drives me insane.) Is that it, you don't want to hurt his feelings? He's a big boy, I'm sure he can take it. And what about Rey? Why is his art so popular? Is he the Jack Kirby of paleoart? Is that why I don't like the art and everyone else does (I was never a Kirby fan, I understand what his art did I just never liked it)? Maybe I just don't 'get it'? It's entirely possible, I zero in and limit what I like and dislike quite quickly. If anyone has any other idea please let me know!

So why am I shooting myself in the foot? Well for years I tried to get into the paleoart business. With little to no success. And now I'm criticizing what others consider a great achievement. I'm just a lowly peon in the world of paleoart and I fear if Holtz or Rey actualyl read this I may very well get 'black listed'. It's happened to me before but I do believe we all have to take a few stands here and there. I've come to accept that I will never be welcomed into the paleoart community so why should I keep my mouth shut any longer? I draw dinosaurs for fun, I will not stop even if the majority of paleontologists don't like me. I don't care.

Email ThisBlogThis!Share to TwitterShare to FacebookShare to Pinterest
Labels: Art, Crap from Brett, Dinosaurs, geekdom, Science, Stuff that bugs the shit out of me

Me too I've been quite not satisfied with some of the Rey's pictures...they're -far- too technically poor, if you know what I mean, and now I know that at least you felt this way like me.
Perhaps you should save something form their text, at least.

I know my blog's italian but with a Google translator I think you might get the whole text. It deals with history of religions, geomythology (Mayor's studies...) and psychology...check it!

Hi Leonrdo,
The funny thin gi his pencil stuff is really quite nice, I think he looses something when translating the layout to the final art. This happens to me to, but I always try to make sure the skeleton fits right. Of course sometimes I do just wing it;)

I checked out your blog, the darn google translator stopped working about halfway down (it did it on Therapoda too.) Two things:

One, you are WAY smarter than I am, I only understood about half of what I read (some of that might have been mistranslated, but lets go with my stupidity;)), it made my head hurt with all that fancy book learnin.

And two, does everyone in Europe write like that? I had a hard time with Dawkin's God Delusion too, maybe it's just me?

I have very a very similar opinion about Rey's art. Everybody loves Rey, but, in my opinion, you can make dinosaurs colorfull without falling in an exagerated pallette, which I think Rey does... Pencil sketches in Field guide to dinosaurs are very dinamic and expressive, but I not feel the same when I look to one of Rey's colorful dinos. I haven't seen the book (I wanted to buy it, but it hasn't been published yet in my country), but some of the new illustratinons by Rey look, as you said, very unnatural, as if the animals and the environment weren't connected...
By the other hand, your artwork (as I said before) looks amazing, and (IMHO) tremendously better than Rey or other "palaeoartists". You should'nt give up about working in a paleo-book or something like that... (I would buy that book without doubts)

Art is a funny thing, not everyone likes the same thing. So some people will like it some will hate it. I know what he's trying to do with all the fancy colors, but in reptiles and crocs the larger they are the more drab they get as they age. I don't know if this it completely true for dinosaurs but since they were large and scaly...

I haven't really given up, I'm more at the 'If it happens it happens' stage. Once I get this darned book finished I try shipping some copies off to museums and the like. Since there really isn't a regular dinosaur magazine except Prehistoric Times (I'll send Mike a copy.) I'll have to settle for museums. On the plus side I'll be moving closer to the NM Museum of Natural History, maybe I can get something going there:)

I'm a professional illustrator just trying to get into paleo art... I hav just purchased this book and agree with you one-hundred percent. THe extreme foreshortening is... not well-done. And the colors are garrish. The pencil sketches are wonderful.

I LOVE your line art. I feel a sense of anatomy and imagination present seldom elsewhere. I hope you won't give up on paleoart. Perhaps take part in the artevolved challenge on sauropods. I'm doing a plateosaurus in 3D. Would love your expert opinion!

Sure I'd love to see it! I keep forgetting about that artevolve thing, I'll check it out.

Plus I've been out of 'Dino mode' for a bit and we just got new nibs for the sylus. But if you check out my dinoblog you'll find newer stuff:) I recently did a skull restoration for Steve Brusette:)

I returned after looking through the pages of the Holtz & Rey Book... (A friend traveled to USA, and I asked him to buy it to me...). and I had to comment here again!

I was particularly surprised by the amount of digitally painted works by Rey. However, I wasn't gratefully surprised... I'm not critisizing as an artist (I am probably a mediocre one, no more), but as a general reader interested in dinosaurs. Dinosaurs and photographs look in different planes, I agree... and colors are sometimes ... well, not very beliable. However, I think the greatest problem with them is the abuse (or bad use) of the digital benefits. On one side, you have dinosaurs with scaly patters probably stolen from a Komodo dragon or something-scaly-like-that, which make more plain the otherwise tridimensional painting... and, on the other hand... duplicating layers of pterosaurs, fishes or birds in the same illustration to represent groups of animals is not correct!! (check the birds in the background of the T.rex head with birds, or the pterosaurs in the Diplodocus painting, etc.). Is not professional!!!
...and the lovely sketches from the "Field Guide..."... all "oranged", distorted and "photoshoped"... why?

hope you have success with your book! I look after the day when it is sold for anybody who wants it (I'll be on that list)