I have seen the cheese! 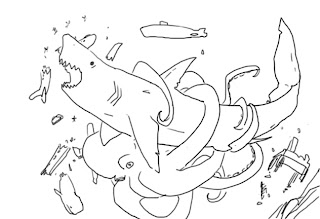 Thanks again to Tom who let me know this was restocked at Amazon. Oh, where to begin!

The scale in this drawing is accurate, these things were huge in the movie. I had really high hopes for the cheese in this movie. Alas, it just wasn't there. Oh it was bad, anyone who can read should have known that, but they didn't even try to take it to he next level. The plot, sonic devices trigger an avalanche in an old glacier, releasing the monsters who were frozen in battle. They mention the shark is a Megalodon (a large prehistoric shark, approaching 60 feet in length. They had thicker teeth than a Great White and a slightly rounder head.) A partial tooth is found in the remains of a whale. What they don't tell you is that a meg tooth averages about 6 inches across, they say the tooth fragment they have found would make it 10 FEET across. Oh and it can fly, it literally is about a half mile out of the water when it eats that plane, this is the best scene in the movie, if you have a low tolerance for cheese, stop the DVD here, I'm not kidding.

The main characters, are all scientists. Deborah Gibson is actually not that bad, here romantic lead is very stiff (a Japanese scientist who never actually speaks Japanese even in Japan and on board a Japanese sub!) and talks like George Takei. He comes over from Japan with evidence of a giant octopus that's destroying oil platforms at sea. The final scientist is Debbie's old Prof, who's sort of a recluse after some sub incident that's never mentioned.

The three are abducted by the US government and forced to help out. They show a shot of Treasure Island naval base in San Fran. And then the next scene show the same shot again along with the subtitle. They should have played with that a bit, you know next scene they name every location on the base they are at. Would have been funny, but they drop it. Debbie and the stiff have a moment of bow chika bow wow. And Debbie gets the idea to use pheromones to lure the creatures to 2 different areas, on in San Fran the other in Japan. They never say HOW they get he pheromones... but it works and the monsters take the bait. Unfortunately they escape and as a parting gift the Meg takes out the Golden Gate Bridge.

Debbie decides the next idea is to "Make them fight each other." So out come the pheromones and they try to lure the monsters back to the glacier so they can kill each other. I don't see why they have to go that far but I guess they only had a 45 minute movie and needed to pad it out a bit. There's some stupid mutiny thing on the main US sub (with Meg pheromones,) Debbie and her Prof escape to a mini sub thing, as the meg eats the sub. While the Japanese scientist is himself on a Japanese sub all speaking English, no Japanese with subtitles, just English... and everyone sounds like George Takei!

Basically the monsters finally fight and drag each other to the bottom of the sea. All the scientist survive and now appear to be looking for more giant sea monsters to fight... And with all the DVD sales, we might actually see them again.... but I'll wait on the next one.

Just once I'd like to see someone actually play to the cheese factor and make the movie fun, I can't believe all these movies get made by complete incompetents with NO actual sense of humor... Oh and Lorenzo Lamas is in this...he plays a bigoted US army guy. That's about all he does. Honestly they just hired him for his name, seriously!

You nailed it! It would have been much more fun but they took themselves too seriously. The moments of camp that I enjoyed where completaly unintentional. I loved the sub interior that looked like a file cooridor in an office building. It was the same set for the american sub and jap sub they just changed the lighting from blue to red. They flipped the fight footage continously to simulate a new battle. And how about the number of times the same octopus tenticle got bit off.After watching I wasn't sure if you would still be grateful I told you where to get it.