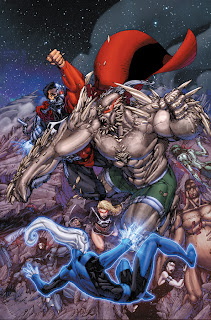 JUSTICE LEAGUE OF AMERICA #55
Written by JAMES ROBINSON
Art by BRETT BOOTH & NORM RAPMUND
Cover by BRETT BOOTH
1:10 Variant cover by DAVID MACK
“The Rise of Eclipso” continues! With the Spectre fallen and darkness spread throughout the DC Universe, no one is safe from Eclipso’s control! Not any of DCs shadow-based heroes and villains. Not Alan Scott and the magical beings of the moon’s Emerald City. Not even the World’s Greatest Heroes! And when Eclipso’s ultimate goal is revealed, they’ll see that it’s scale is even bigger than the DC Universe. One lone hero has the power to make sure all be well however...for he has hope. Introducing Blue Lantern Saint Walker to the Justice League of America! In the remains of New Krypton, Doomsday tears through Batman, Supergirl and Alpha Lantern Boodikka in his search for Cyborg Superman as “Reign of Doomsday” rampages on!
Retailers please note: This issue will ship with two covers. Please see the Previews Order Form for more information.
On sale MARCH 23 • 32 pg, FC, $2.99 US
Posted by Brett at 12/20/2010 06:04:00 PM

I can't wait for these issue's to come out ! They look awesome , How many issues will there be for the complete story ?

Let's see, my arch is supposed to be 4 issues, but I'm told their will be a 5th issue to complete the Eclipso story (I don't know if I will be drawing that as well.) I'm not sure about the specifics on it yet. When I do know more I will post it:)