I almost choked on my breakfast! 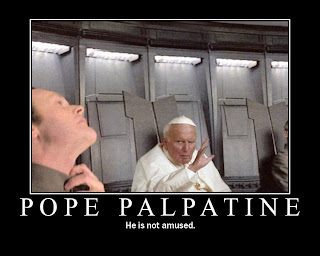 This is not the current Pope, which would have been even better but it's pretty damn funny anyways! Found via Stupid Evil Bastard.
Posted by Brett at 3/21/2009 09:32:00 AM

And that new Pope, geez, he looks like one of The Gentlemen from Buffy.

The difference is that The Gentlemen only wanted to murder a few people for their hearts while the Pope is trying to destroy all of Africa by convincing them that condoms don't help stop the spread of HIV/AIDS.

LOL! I think of him more as the Emperor from Star Wars, Return of the Jedi. But I get the Gentlemen guy too. It took me second to remember that. I really need to get those on DVD.

It will be interesting to see how many die (tragic but interesting) for the simple fact that the religious keep comparing evolution to the Nazis. I guess we'll get to see how many people religion kills first hand. I'd rather not and HOPEFULLY the the circumcisions will help a bit if they take the Pope's advice. It's not much, but it's something.

Unless I missed something, the Pope doesn't support condoms for American married couples either, right?

I guess it is important to remember that evangelical Christians from America, Europe, and the AIC (African Initiated Churches) are often recognized as being the largest support system for those who have HIV/AIDS.


As long as anyone donates time or money to help the epidemic I'm sure the African people appreciate the help. What is troubeling is when you see stories carried in the mainline media which only mention the Pope's comments and they don't cover what the majority of other Christian churches are doing or the powerful impact Evangelicals are having for good.

Yes you did miss something Steve, the evangelical Christians are the ones who wouldn't fund condom use for the last 8 years, and helping them after you've screwed them over doesn't make up for killing them in the first place. It has been shown that condom use can prevent 80% of STDs that's a lot. If you prevent the funding for that based on your religion, you have effectively killed all those people... they don't have the medicine over there like we do, they die.

And the majority of people with Aids in Africa are married... the men sleep around and the women get it from their husbands. Marriage really has nothing to do with condoms. If the Pope and the EVIL Christians would get their heads out of their fricken asses, maybe all those poor people wouldn't ave to die.

If abstinence has a 100% success rate when done correctly and condoms have an 80% success rate, I think you can readily see the better choice. Of course abstinence isn't a lifelong reality so for those who want to have success a monogomous sexual relation with someone who does the same-again 100% success rate at preventing sexually transmitted disease. Maybe Christians aren't so kooky. Of course most people make sex decisions based on the heat of the moment, what they want rather than what is good for them; so you end up with looking for solutions which manage consequences of bad decision making. Again limiting partners is far more effective and practical than promoting condom use; everyone always has access to their values, you won't always have access to a condom (even if distributed.)


It might be important to look at those who are actually studying the problem and have first hand experience rather than echoing op ed pieces.

Edward C. Green, the director of the AIDS Prevention Research Project at the Harvard Center for Population and Development Studies, and Allison Herling Ruark, a research fellow at the Center:

In fact, the mainstream HIV/AIDS community has continued to champion condom use as critical in all types of HIV epidemics, in spite of the evidence. While high rates of condom use have contributed to fewer infections in some high-risk populations (prostitutes in concentrated epidemics, for instance), the situation among Africa’s general populations remains much different. It has been clearly established that few people outside a handful of high-risk groups use condoms consistently, no matter how vigorously condoms are promoted. Inconsistent condom usage is ineffective—and actually associated with higher HIV infection rates due to “risk compensation,” the tendency to take more sexual risks out of a false sense of personal safety that comes with using condoms some of the time. A UNAIDS-commissioned 2004 review of evidence for condom use concluded, “There are no definite examples yet of generalized epidemics that have been turned back by prevention programs based primarily on ­condom promotion.” A 2000 article in The Lancet similarly stated, “Massive increases in condom use world-wide have not translated into demonstrably improved HIV control in the great majority of countries where they have occurred.”
Faith communities are not shutting their eyes to evidence when they choose to emphasize the “core recommended strategy of abstinence before marriage and faithfulness within marriage.” These behaviors have, in fact, proved far more effective than condom use in curbing HIV transmission for the vast majority of any population. A 2001 study of condom use in rural Uganda found that only 4.4 percent of the population reported consistent usage in the previous year, a rate that is probably typical of much of Africa. In contrast to the estimated 95 percent or more of Africans who did not practice consistent condom use in the past year, studies from all over Africa show a solid majority of men and women reporting fidelity over the past year, with a majority of unmarried young men and women reporting abstinence.
…
Thus far, research has produced no evidence that condom promotion—or indeed any of the range of risk-reduction interventions popular with donors—has had the desired impact on HIV-infection rates at a population level in high-prevalence generalized epidemics. This is true for treatment of sexually ­transmitted infections, voluntary counseling and ­testing, diaphragm use, use of experimental vaginal microbicides, safer-sex counseling, and even income-­generation projects. The interventions relying on these measures have failed to decrease HIV-infection rates, whether implemented singly or as a package. One recent randomized, controlled trial in Zimbabwe found that even possible synergies that might be achieved through “integrated implementation” of “control strategies” had no impact in slowing new infections at the population level. In fact, in this trial there was a somewhat higher rate of new infections in the intervention group compared to the control group.

Steve, I don't trust ANY scientist who actually thinks abstinece works... It's been shown over and over again that this is plainly false. If people say they are abstaining it just means they aren't having regular sex. They are still doing oral and anal sex, they might deny it but they are still doing it. People WILL have sex, regardless. And since you don't seem to actually know that the people who are getting infected the most are now WIVES who's HUSBANDS visit prostitues, maybe you might sing a different tune if those husbands used condoms? For some reason you seem to forget that different cultures will do things differently (of course forcing their world view on others is the religious's favorite past time) and while I might not agree with going to the prostitutes, it's a fact and that must be taken into account. Ignoring it and preaching abstinence is only going to make things worse.

After doing a little digging I have found that surprise, surprise, Green is a religious loon appointed by Bush...

I knew something didn't smell right:
In 2003 the Bush administration appointed Edward Green to the Presidential Advisory Council on HIV and AIDS.

The following is from an article back in 2003:

Edward C. Green, one of the three new appointees, is a senior research scientist at the Harvard University School of Public Health and a medical anthropologist. Green, a recognized expert on global AIDS issues who has specialized in AIDS in African nations, told a Congressional committee earlier this year that he supports the so-called “ABC” approach to AIDS prevention in Africa. The approach calls on people considered at risk for HIV infection to “abstain, be faithful, or use condoms.” But an anthropology professor from the State University of New York, who knows Green through anthropology circles, said Green has recently called condom promotion “a waste of time and money” and has backed abstinence-only and “fidelity-only” programs for Africa. “It is likely that he will use his position on the Advisory Council to support abstinence/fidelity-only programs and oppose condom promotion in the United States as well,” said anthropology professor Douglas Feldman. http://www.washblade.com/2003/8-22/news/national/minordis.cfm

I guess the religious agenda IS what is most important to the religious, screw any actual science if it tells you the opposite.

Here's a nice take down of Green:

I keep telling you not to just cruse the Christians sites about this kind of stuff. They tend to make stuff up, just like the Anti Vaccine people, regardless of repeated studies and countless facts.

Sorry, your link isn't working for me.

I understand you don't like Green's personal beliefs. That doesn't affect the facts.

It also doesn't change that the vast majority of humanitarian efforts in Africa are done by Christians. Maybe you don't like there moral views on sex, but you have to support the free medical and social changes that missionaries are helping to facilitate.

It didn't make a link you'll have to copy and paste it. I know it's tough, but I can walk you through it;) It worked for me.

Here's the guy's name and info if you want to google him:

Douglas A Feldman, applied medical anthropologist, has been active in AIDS research and policy since 1982. His latest book is The AIDS Crisis: A Documentary History (1998).

And this has everything to do with Facts. NOT beliefs. Of course since Bush was the anti science guy and his people were 'encouraged' to fudge facts we can't trust anything his science team came up with. that's a fact you can even look it up.

You can't pick an choose the ONE person who agrees with you and call it a fact when everyone else disagrees with you. He's basically saying using condoms will give you AIDS. And it's true that abstaining from sex is the only 100% way of not getting HIV people will do it anyways. You have to hope for the best and plan for the worst. Condoms provide 80% protection, circumcision provides 60%, which would you want if someone forced sex upon you?

And here's some more stuff from the CDC and Lancet: