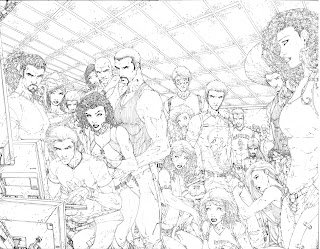 Not really, but it's always hard to draw a DPS with a ton of characters you've only drawn once before. But it's done;) For the upcomming Vampire Huntress Graphic Novel.

Some good new on the TV front. All of the shows I watch have been renewed! Yeah! I think this is the first season that's happened. Now I just have to hope that Warehouse 13 on scifi is as good as Eureka and I'll be set for the fall TV season:) I've watched most of Dollhouse and was really surprised it was picked up. If the last 2 episodes are any good I might stick around for the second season. And I do want to thank NBC for picking up Chuck. It's actually the only show I watch on the peacock which is really weird because I used to watch only NBC.

Now that I think about it I'm not sure if Gary Unmarried has been picked up but I don't go out of my way to watch it but it is pretty funny. So here's hoping:)

So here's the list fo the shows I watch:

Chuck
Big Bang Theory
Castle
Fringe
Bones
Eureka
Sanctuary
Dollhouse (I usually DVR this and watch it when I'm in the mood for it.)
Venture Brothers
Robot Chicken
South Park
Psych
Clone Wars ( I actually hate the last 3 movies but these episodes are really quite fun. Now if they could just get Lucas away from the property I might actually like it again!)

Shows I watch but not religiously:

How I Met your Mother
2 and a Half Men
Rules of Engangement
Gary Unmarried
Batman the Brave and the Bold (for the cheese factor, I mean Booster Gold?!?!?)

As you can see I prefer scifi and comedies. I'd rather be entertained than 'emotionally moved.';)

I like Booster Gold and my friends make fun of me for it...I just started watching Fringe and its now like my past time to go back and find the Observer...its been fun.

LOL...only things on your list I watch is South Park, Star Wars.

I can't sink my teeth into the new Batman and I just haven't gotten around to watching Sanctuary yet.

I was so pissed yesterday when Fox saved Dollhouse (Hate Dollhouse as it were) over Terminator, even though Dollhouse had a bigger drop in the ratings and Terminators DVR and online viewers were so much higher. But it all came down to who owned the DVD rights, WB Terminator, Fox Dollhouse. BS!

I personally liked Booster in JLI, but I didn't like the comic.

I did for get to put Better off Ted on my list. I'll have to go back and edit that.

I watched season 1 of TSCC but after a few episodes of season 2, I dropped it. I just didn't like the woman playing Sarah Connor. Dollhouse... it's no Firefly.

Sweet! I love the new drawing of the Guardian team all together... it's so hard to follow some scenes in the books because Leslie has to describe pretty much what every member is doing! Love this so much, can't wait to see more! :D

I actually just finished reading the last book of the series about 10 minutes ago, great ending I must say, if a little rushed... but there is definitely a chance of some more books in another series with how it ended. :)

Just had another though... Can only imagine how awesome a picture of Carlos battle bulked and fangs dropped will be drawn by you! >:D